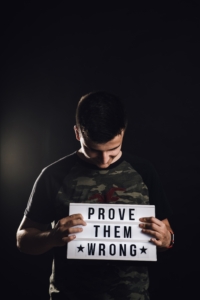 When you fully understand what it means to have confidence, you’ll be better able to cultivate those feelings within yourself.

Some of your studies should be more of a personal nature—looking within yourself. Then, you can reflect on others regarding their confidence levels.

Take a look at these questions to aid you in your study of confidence:

Your personal and intellectual study of confidence will help you cultivate your own confidence. Reflecting on what having confidence means to you, how you would change, and how you would feel as a confident person are important.

Also, imagining how your life would be affected if you were confident helps you gain a better understanding of confidence and how to grow it.

Finding a confident role model will provide you with opportunities to observe, learn, and apply some of your role model’s ways of living.

Finally, expanding your knowledge base about confidence through reading self-help books and discovering helpful websites will also serve to bolster your confidence reserves.

“Self-confidence is not the same thing as ego. This is not to say that the two don’t (frequently) dance hand in hand down the street, pushing over old ladies in crosswalks and kicking baby kittens. But they are definitely not the same entity. Ego is thinking you have all the answers. Self-confidence is knowing you don’t have the answers, but being pretty sure that you will be able to find them.” ~Maggie Stiefvater 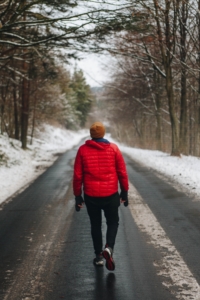 In order to go after your dreams, it’s important to have a clear idea of what you’re seeking in life. When you can define the life you’ll live when your dreams come true, your passion will ignite. And once your passion is burning bright, you’ll be compelled to develop the confidence you require to achieve those dreams.

Explore the following questions to aid you in visualizing what your desires will “look like.”

Imagining what your future will look like on a regular basis will help you build a mindset that encourages your confidence. When you often entertain your visualization, you’ll begin to realize, “This is going to happen—I can live the life I want.”

“With the realization of one’s own potential and self-confidence in one’s ability, one can build a better world.” ~Dalai Lama

How to Lead With Courage

When we think of leaders, we might be tempted to think of courageous and heroic figures. The leader is the person at the vanguard of the army, leading the charge and taking the brunt of any enemy attacks. That’s what it means to be a leader in comic books and films after all!

Of course, this is not the reality for most of us. Most people will be managers and parents, where there is very little gunfire or charging.

But that doesn’t mean you can rest on your laurels. It is still very important to be courageous and heroic. It’s just that this courage will take a different form.

The best leaders are action-takers. When we lead through action, we set a positive example for our team and inspire them to similarly take action. In this way, we avoid one of the worst traits that any leader can possess: hypocrisy.

There are few things that will inspire dissent in your ranks as quickly as being seen to be hypocritical.

Nobody likes being asked to do things because they feel that their superior is simply unwilling or even afraid to do it themselves. You are in charge and with that comes responsibility. Simply giving the worst jobs to your team and not taking part in them yourself is an abuse of your power.

Leading through action also means being decisive. It means being able to quickly make a decision and be willing to commit to that action.

Many lesser leaders make the mistake of deferring or avoiding decision-making. Their fear is that they’ll make the wrong decision and thus lose the respect of their staff.

However, being indecisive is worse than making an unwise or incorrect decision. Being indecisive makes you seem weak. And while taking action can result in a negative outcome, delaying a decision will only ever have negative consequences.

How is decisiveness a mark of courage?

Simply, it means that you’re willing to accept the responsibility that comes with the role of being a leader. Being a leader doesn’t mean telling others what to do and it certainly doesn’t mean getting to take all the credit.

Being a leader means taking responsibility for the team. It means protecting them, so they can do their best work. It means making decisions and being willing to deal with the consequences. It’s only when we don’t want to look bad that we avoid making decisions… and that is ultimately a mark of cowardice.

Finally, being a courageous leader means that you take your lumps when things do go sour. If you make a mistake, it’s important to not only own up to it, but also stay calm and collected when you’re reprimanded by your own superiors, or when the organization risks collapsing or heading toward receivership or administration

Likewise, it’s crucial to remain calm in a crisis. That means setting a good example when things seem to be going wrong for the team. Prevent your team from going into a panic. Stay calm and you’ll be able to address the issue in the best possible way.

How to Be the Hero They Need

Where does all this courage and stoicism come from? How can you acquire it if you don’t possess it naturally?

Does it mean trying to act tough?

Being a truly great leader comes from having the right priorities. It means forgetting yourself and, instead, focussing on the goals of your organization and the happiness and comfort of your team. When you do that, it’s easy to be a courageous leader.

Put your best foot forward and make each step count.

Leadership is a daunting task, and there are many theories about how to best lead others. But regardless of the theory employed, there are qualities that great leaders share. With the right blend of attributes, you can thrive within any leadership system. It’s possible to develop these characteristics with study and effort.

Ideas are easy. It’s the execution that’s so challenging. Big ideas require multiple people to bring them to life. Leadership is all about getting everyone on the same page and moving them in the same direction.

1. Confidence. Confident people inspire confidence in others. When your team sees your confidence, they believe that you know where you’re going and how to get there. Confidence is contagious and elevates morale. No one else will be confident if you’re not.

* Keep up morale by dealing with setbacks confidently.

2. Trustworthiness. One of the most important attributes of a great leader is character. People need to trust someone before they will follow him. This is accomplished through honesty, walking the talk, and showing respect. Keep your word and follow through.

* It’s challenging for a team to accomplish anything without trust.

3. Enthusiasm. Be enthusiastic about the task at hand, your position, and the opportunity to lead. No one will be more enthusiastic than you are. Demonstrate the type of enthusiasm you’d like to see in your team members. Let everyone know that you believe in your mission and its importance.

* Sometimes a break is in order. Enthusiasm can wane under a never-ending workload.

4. Steadiness. There will be obstacles and times of uncertainty. Great leaders can weather these situations and demonstrate the steadiness necessary to keep the rest of the team focused. These are the times your team will look to you the most. Be positive. Be confident. Be a rock.

* It’s natural to have doubts. It’s not effective to share them. If you need someone to talk to, reach out to your spouse or best friend. Keep all negativity out of the workplace.

5. Focus. It’s easy to become distracted, especially when things start going wrong. Learn to ignore the noise and stick to the relevant facts. Avoid looking too far ahead. Deal with the current situation and maintain your commitment.

* Focus can begin to creep when projects drag on for an extended period of time. Return to your mission statement frequently to keep your focus fresh.

6. Flexibility. Nearly anyone can hold the course, but only a great leader can change course without tipping over the ship. Be open-minded enough to find the elegant solution to the challenges that arise. A few course corrections are the rule rather than the exception.

* Avoid confusing steadfastness with stubbornness. It’s important to realize when it’s time to make some changes.

7. Communication. Be able to effectively communicate your vision to the others in your group. Be willing to listen to new ideas. Provide the information required for others to do their best. Communication skills are paramount to all leaders. If you’re looking for a single skill to enhance, this is a great place to start.

Leadership skills can’t be learned and developed in a day. Bringing an idea into the marketplace requires a leader. Make yourself the obvious candidate.

To grow your leadership skills, engage a leadership coach CLICK HERE to learn more about coaching.

How to Navigate Change

There are so many questions that most of us ask ourselves when it feels like life has turned upside down.

These are valid questions to ask ourselves when faced with unprecedented change.

Fear of the unknown places us into a flight or fight mode, but to remain in this altered state for long periods is not good for our mental health and wellbeing.

Not knowing what lay ahead causes our anxiety levels to take over and influence our thinking and behavior.

Need someone to talk to?

Well, guess what – at Wariga Molla, we listen and are happy to work with you to gain perspective, insight and talk through your fears.

Providing a safe space to talk via Zoom or Skype is the best place to start. Let’s make contact and I will hold the space to provide you with an opportunity to talk and then develop strategies to navigate this difficult period.

Is your life out of balance?

From time to time, everyone’s life can get a little out of control. You spend too much time focusing on work, and your family life suffers. Or you spend too much money on your social life, and your finances suffer. Maybe you’re running yourself ragged and your health is taking a back seat.